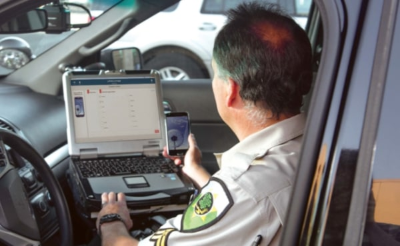 We’re all familiar with the Breathalyzer, the brand name for a roadside device that measures a suspected drunken driver’s blood-alcohol level. It has been in use for decades. Now there’s a so-called “textalyzer” device to help the authorities determine whether someone involved in a motor vehicle accident was unlawfully driving while distracted.

The roadside technology is being developed by Cellebrite, the Israeli firm that many believe assisted the Federal Bureau of Investigation in cracking the iPhone at the center of a heated decryption battle with Apple.

Under the first-of-its-kind legislation proposed in New York, drivers involved in accidents would have to submit their phone to roadside testing from a textalyzer to determine whether the driver was using a mobile phone ahead of a crash. In a bid to get around the Fourth Amendment right to privacy, the textalyzer allegedly would keep conversations, contacts, numbers, photos, and application data private. It will solely say whether the phone was in use prior to a motor-vehicle mishap. Further analysis, which might require a warrant, could be necessary to determine whether such usage was via hands-free dashboard technology and to confirm the original finding.

The legislation was prompted by intense lobbying from the group Distracted Operators Risk Casualties (DORCs). The son of its co-founder, Ben Lieberman, was killed in 2011 by a distracted driver in New York. The proposed law has been dubbed “Evan’s Law” in memory of 19-year-old Evan Lieberman.

“When people were held accountable for drunk driving, that’s when the positive change occurred,” Lieberman said in a press release. “It’s time to recognize that distracted driving is a similar impairment, and should be dealt with in a similar fashion. This is a way to address people who are causing damage.”

Cellebrite already has roadside devices to scrape the contents of a phone, so this technology would just dial it back a bit. If the legislation passes, Cellebrite would have to bid on the project, as would other tech firms.

“Cellebrite has been leading the adoption of field mobile forensics solutions by law enforcement for years, culminating in the formal introduction of our UFED FIELD series product line a year ago,” Jim Grady, Cellebrite’s CEO, said in a statement. “We look forward to supporting DORCs and law enforcement–both in New York and nationally to curb distracted driving.”

The law, which is before the New York Senate Transportation Committee, would recast the motor-vehicle driving law to make it so that motorists give “implied consent” for “determining whether the operator of a motor vehicle was using a mobile telephone or portable electronic device at or near the time of the accident or collision, which provides the grounds for such testing. No such electronic scan shall include the content or origin of any communication, game conducted, image or electronic data viewed on a mobile telephone or a portable electronic device.”

Police will inform motorists involved in an accident that “the person’s license or permit to drive and any non-resident operating privilege shall be immediately suspended and subsequently revoked should the driver refuse to acquiesce to such field test.”

According to the Centers for Disease Control and Prevention, each day in the US nine people die and more than 1,153 are injured because of distracted driving accidents. That’s roughly 20 percent of mishaps caused by distracted driving.

“The facts regarding distracted driving are startling,” said Republican New York Senator Terrence Murphy, who is one of the proposal’s backers.

The cause of the accident that killed Evan Lieberman was discovered after the Lieberman family subpoenaed the mobile phone records of the driver involved in the crash, which showed that the motorist was allegedly distracted while driving.