JACKSBORO – (JACKSBORO) The sheriff of Campbell County fired back Friday at a controversial judge who deflected blame to jailers for wrongfully changing a criminal charge against a Jacksboro woman.

On Thursday, General Sessions Judge Amanda Sammons denied a request to remove herself from the case of 26-year-old Krista Smith. Smith’s attorney, Kristie Anderson, filed the motion to disqualify Sammons from the case. Anderson accused the judge of improperly changing a charge against Smith without notifying the defendant, the police, or prosecutors. 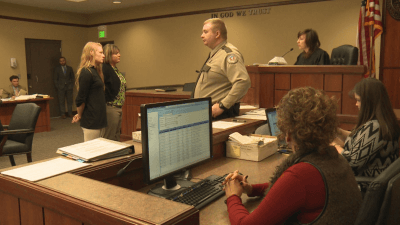 Judge Sammons denied the accusation and said she “never told anyone to change any charges.” Sammons placed responsibility with the jailer, officer Tonya Severson.

“I did not order Officer Severson to change anything,” said Sammons during Thursday’s hearing.

Sheriff Robbie Goins sent 10News a statement defending his employees, saying any changes made by the jailer were due to “direct communications and orders with the judge as documented. We simply can’t agree with an assessment that impugns the integrity of our staff when a factual direct reflection presents otherwise.”

Reporter’s note: See the sheriff’s full statement at the bottom of this article.

The case started Friday, January 22, when a Caryville police officer stopped Smith while driving on 25W because her children were not wearing seat belts. Smith also did not have insurance and her license was suspended. The officer arrested Smith for “child abuse endangerment neglect” and took her to the Campbell County Jail. 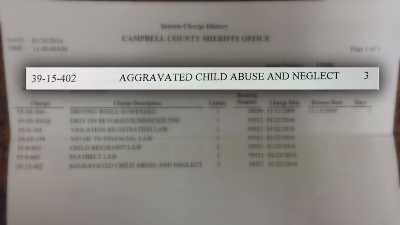 Multiple law enforcement officers have expressed opinions on the background to 10News that the arrest for child endangerment, a low-level felony, was likely an incorrect charge based on the actual seat belt violation. However, the charges could be argued and sorted out later in court.

Smith arrived at the jail on Friday, Jan. 22, at 4:08 p.m. and awaited bond to be set. Due to severe winter weather, Judge Sammons was snowed-in and set bond for inmates on Saturday via telephone. Jail records show Sammons asked the charges against Smith to be changed to a much more severe crime of aggravated child abuse and neglect and set bond at $250,000. The aggravated charge carries a penalty of up to 25 years in prison. 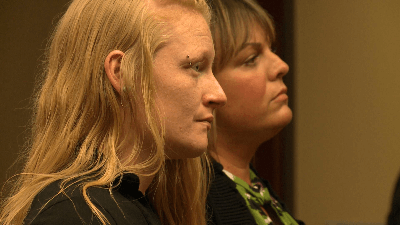 During this week’s hearing, Judge Sammons admitted she set bond at $250,000 because she mistook Smith’s case with a separate case of child abuse that DCS contacted her about on January 19. That case involved methamphetamine and a 4-year-old child pricked by a needle.

“When I heard the charge of child neglect, I thought it might have been that case,” said Sammons. “I said ‘set

Sammons said after setting the initial bond, she immediately tried to contact DCS to confirm Krista Smith was the person involved in the methamphetamine case. Unable to reach DCS on a Saturday, Sammons decided to give Smith “the benefit of the doubt” and called the jail back at 3:30 p.m. to reduce bond to $10,000.

On Sunday, Sammons said she was able to see the warrants for the first time and then reduced Smith’s bond to $500 and marked through the word “aggravated” in the charge with a pen. 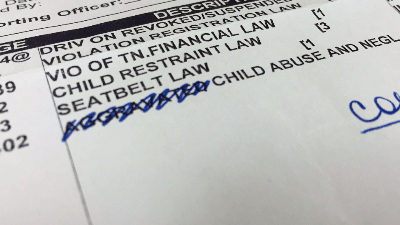 Judge Amanda Sammons marked through the “aggravated” change to the charges against Krista Smith. (Photo: WBIR)

“Don’t tell me I didn’t treat her [Smith] the same as I treat every single person. Because that is my job, alright? I’m a judge,” said Sammons during Thursday’s hearing before denying Anderson’s motion to disqualify.

Sammons also pointed out the mistake regarding the bond was cleared up within one day during a weekend when the entire area was buried in heavy snow.

“Most people, before I took office, would sit in here with no bond for a lot longer than that,” said Sammons. 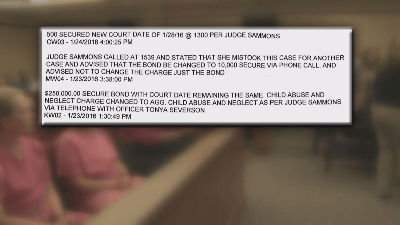 The state’s District Attorney General Conference confirmed the local district attorney for Campbell County has asked for the appointment of an outside investigator or prosecutor to figure out what actually happened.

Matt Lyon, the associate dean, and professor at the LMU Duncan School of Law, said it is a big deal if a judge unilaterally changes the charge against a defendant.

“It would be improper. In our judicial process, it is not the judge’s role to decide what a charge should be or whether a charge is sufficient,” said Lyon. “You have to go through the proper steps and include the prosecutors and the defense.” 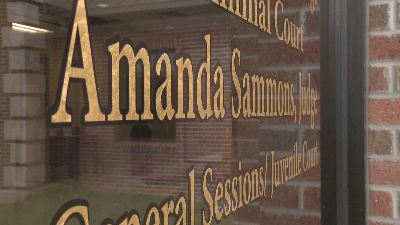 Amanda Sammons's name on the window of the Campbell County courthouse. (Photo: WBIR)

Lyon said even if this was a case of mistaken identity and a clerical error that was resolved within a day, the situation does not reflect well on the judge for essentially shooting first and asking questions later.

“It’s a little dubious. If it was a pure mistake, and you thought you were referring to Case-A but it was the other case, why then would you go back and rethink it after the fact? If there was any doubt, you would ideally want to resolve that with prosecutors, the magistrate, or officers who made the arrest beforehand,” said Lyon.

Lyon said the removal of an elected judge requires impeachment by the state Legislature.

Voters in Campbell County elected Amanda Sammons as judge of General Sessions and Juvenile Courts in August 2014. Her campaign website touted the former prosecutor after she campaigned as a “blue-eyed assassin” with “low tolerance for foolishness.” 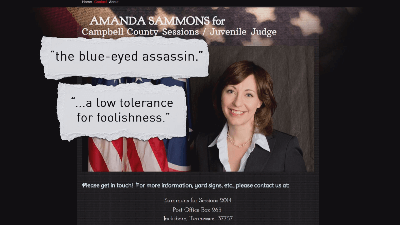 The campaign website for Judge Amanda Sammons in 2014. (Photo: WBIR)

Since taking her seat on the bench in September 2014, Sammons has also come under fire from defense attorneys and a fellow judge for how she has handled other cases. Those criticisms have dealt primarily with charging fees to the poor for public defenders they never used as well as removing children from homes without requests to do so from the Department of Children’s Services (DCS).

“The circuit court judge up there, Judge [John] McAfee, has stated publicly that he has filed a complaint against her [Sammons] with the Board of Judicial Conduct,” said Lyon.

Below is the full statement Campbell County Sheriff Robbie Goins sent Friday to 10News regarding the claim by Judge Sammons she never instructed the CCSO jailer to change the criminal charge against Krista Smith.

“While we strive to continuously respect every court's decision, opinion, instructions, and unbiased judicial process and we do so from a position of integrity in this office, absolutely, and demand that same expectation from our employees. However, given the circumstances surrounding the incident involving Kristi L. Smith, we have to respectfully disagree with the court's assessment yesterday that those documented actions and detailed orders filed by our corrections staff honoring verbal requests and communications by the judge never took place. Our corrections staff acted professionally, honestly and exactly as reported, filed and documented as to actions referenced in the Kristi L. Smith proceedings from direct communications and orders with the judge as documented. We simply can’t agree with an assessment that impugns the integrity of our staff when a factual direct reflection presents otherwise.” – Sheriff Robbie K. Goins